A previous blog post discussed the design of the DNA Ontology and its focus on events and situations (e.g., verbs). The ontology is designed to be general and flexible. So, the OntoInsights team sought to evaluate its usability in a totally different domain ... to capture and fuse Environment, Social and Governance (ESG) data.

To this end, we created and hosted a sample knowledge graph as part of the Hanken Quantum Hackathon 2021. The graph fused information about 1900+ companies -- including their industries, profits, environmental impacts, and country of headquarters -- and combined that with data about their "headquarters" country.

This post explores our experiences in creating that knowledge graph.

The company data provided dollar amounts (in US Dollars) for various types of environmental impacts. This data was extracted (using Python code) from a spreadsheet based on the Harvard study, Corporate Environmental Impact: Measurement, Data and Information. The country data, on the other hand, provided statistics on a country's electricity production, environmental issues, demographics and many, other details. It was assembled by web scraping the pages of the CIA World Factbook.

Similar to the design of the DNA Ontology, the Hackathon data was organized based on the “6Ws” - Who, What, Where, When, Why and hoW:

All the above concepts were condensed from the various modules in the DNA GitHub ontologies directory, to the file, background-ontology.ttl. It was not necessary to do this condensing, but it simplified the resulting HTML documentation tree that was generated. (The file, hackathon-ontology-tree.html, is an HTML, searchable tree view of all the concepts -- classes and properties -- in the Hackathon ontology modules. The file can be downloaded and opened in any browser to show the inheritance (e.g., generalization-specialization) hierarchy of the classes and properties.)

For the Hackathon, it was also necessary to extend the DNA Ontology to define the specific Measurement and Assessments that were captured from the data sources. The new Measurement and Assessment sub-classes are specified in the hackathon-esg-ontology.ttl file in GitHub (and are included in the HTML tree documentation discussed above). Beyond the new classes, it was also necessary to define a few new properties. The new properties are listed below along with the reasons for their definition:

Lastly, reviewing all the files in the hackathon-extensions directory of the DNA ontology on GitHub, one finds a few more files beyond the background-ontology and hackathon-esg-ontology modules. These are:

In order to better understand this discussion, it is valuable to visualize the Hackathon concepts and data.

This is shown in Figure 1 below. 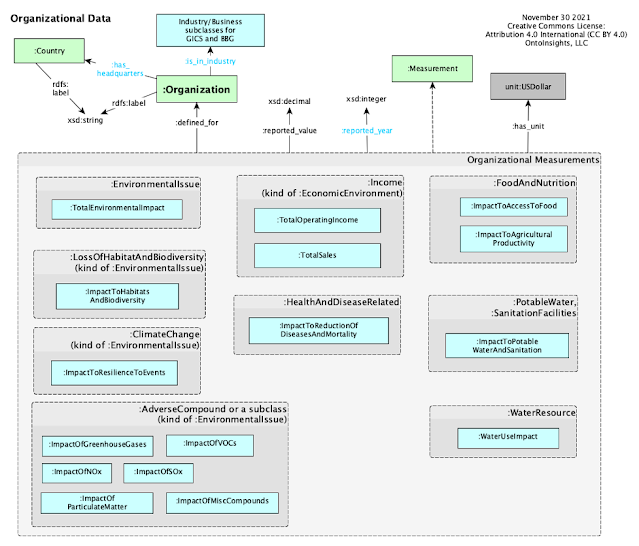 For countries, the knowledge graph held a variety of economic data (GDP, unemployment rate, inflation rate, …), land use data (total land area and the amount of arable land, forest, …), information on waste generated and recycled, data on electrical production and consumption as well as the production and consumption of natural resources such as crude oil and natural gas, data on CO2, methane and particulate emissions, information on the percentages of the population in poverty and without potable water or sanitation facilities, and much more.

These concepts are shown in Figure 2. 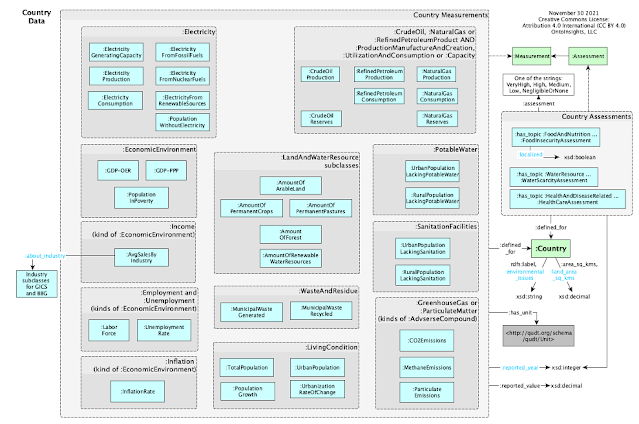 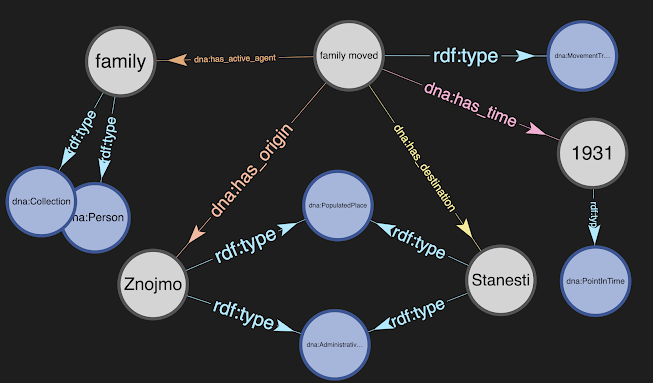 Deep Narrative Analysis' (DNA's) long-term goals will be achieved by research and experimentation, taking small steps and refining our designs. Our ultimate goal is to create a tool that compares narratives and news articles, and indicates where they align and diverge, what events are mentioned (or omitted), and what words are used. This, then, can be used to understand if a news article is biased, or if there are certain themes that are consistent across a set of narratives and articles. Regarding themes in narratives, DNA can be used to find evidence regarding what combination of circumstances, actions and events are correlated with an individual's success or failure in a situation, such as overcoming addiction. To achieve this long-term goal, we need to transform the text of a news article or narrative into a semantically-rich, machine-processable format. Our choice for that format is a knowledge graph . The transformation is accomplished using syntactic and semantic pro
Read more

Over the last few years, there has been an on-going, vigorous debate regarding the future of artificial intelligence (AI) and machine learning (ML), and what needs to be developed. The debate comes down to using only machine learning technologies (based on different mathematical models and performing correlation/pattern analysis) versus using a combination of machine learning and "classical AI" (i.e., rules-based and expert systems). (Note that no one believes that rules-based systems alone are enough!) You can read about those debates in numerous articles (such as in the MIT Technology Review , ZDNet's summary  of the December 2020 second debate, and Ben Dickson's TechTalks ).  Given my focus on knowledge engineering, I tend to land on the side of the "hybrid" approach (spearheaded by Gary Marcus in the debates) that combines ML and classical AI, and then I add on ontologies (to provide formal descriptions of the semantics of things and their relationships
Read more