Over the last month, OntoInsights has developed a prototype application to analyze human narratives, utilizing linguistic and semantic theory, and building on open-source offerings in machine learning and natural language processing. The application shows how the concepts behind Deep Narrative Analysis (DNA, as discussed in our first blog post, The Power of Narrative) can automatically convert stories in the form of unstructured text, into machine-analyzable knowledge graphs that retain all their richness.

In this blog post, we overview the structure of the DNA application (which is available in the dna directory of our project on GitHub). You might be interested in the structure if you want to review or reuse our code to process PDFs and unstructured text, get background Wikidata, create a simple GUI, and more.

Our approach to development is to start by encoding the basics of a design approach or algorithm in a Jupyter notebook, or use a notebook to generate the knowledge/triples for background data. Looking at the notebooks directory on GitHub, you can see that we have been experimenting with:

When the initial results are 'good enough', we then move the code into our prototype application, and test and tweak it further there.

So, what does the DNA prototype application do? And, how does it do it?

DNA is written using a very simplistic front-end based on PySimpleGUI. Our goal at this point is to work on the hard problems of semantic parsing and natural language understanding (NLU), and not to create an award-winning interface. (That will come later.) So, the interface is clunky but it shows what we want to do:

The application's startup screen is shown in the figure below. Each of the tasks above is represented by a button, and pop-up help text is shown by clicking on the question mark to the right of the button. All the help text is found in the help.py file in the dna directory, and serves as our roadmap for building out functionality. 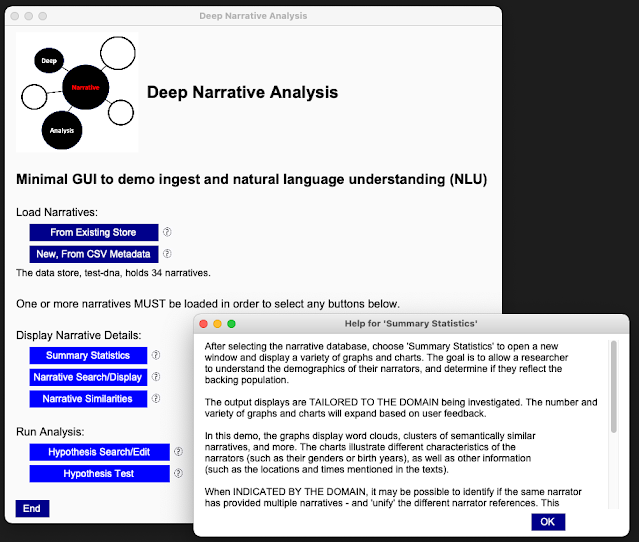 At this time, we are working on the core functionality and only the first four buttons are functional. For example, we have successfully used spaCy's dependency parsing to output a narrative timeline. An example is shown below. The output is promising but is still basic with errors and missing information. Also, we need to change the output from text to triples in a knowledge graph. That is our goal for our work in June.

One last item to note is that the DNA prototype includes testing (see the GitHub project's tests directory) and code coverage metrics (in the htmlcov subdirectory of tests). We aren't there yet, but we want 90% coverage on all processing (e.g., non-GUI) modules. (In today's code, that would be the database, load and nlp files, and portions of the details_xxx files.)

DNA infrastructure use of narrative

A Focus on Verbs, Not Nouns

April 04, 2021
When people listen to stories, they hear about persons, places, and things. When people listen to great stories, they experience events, situations, outcomes and actions.  From stories, we learn about the challenges, opportunities, feelings and decisions faced by others in a way that enables us to better understand the entire experience and relate to it. That is why at OntoInsights, we start our work focused on verbs (focused on what is happening and being experienced).  When we start with verbs, we can construct a complex timeline and add in who, what, where, when, and why.  This is a powerful approach to storytelling, and a powerful approach to analysis to gain a holistic view of the experience of the storyteller. This blog post introduces a new starting point for ontology development that is novel in that it focuses on verbs. The approach begins by understanding the events and situations of interest in the domain being described, versus trying to catalog all the possible &
Read more

The Power of Narrative

April 04, 2021
Welcome to the first OntoInsights blog post which explains the company’s focus on narratives.  People have listened to and studied stories for insights into cultures, customs, values and life. They have used narratives to explain how and why the world works, and their experiences in it. Stories are humans’ approach to structuring knowledge and providing insight.  Listeners can easily extract knowledge from narratives, but for a computer to do this, a combination of approaches and technologies is needed:  Natural language processing (NLP) to parse the text  Semantic (ontological) and linguistic understanding to distill meaning  Graph technologies to encode the events of the narratives and background knowledge  Pattern recognition algorithms to discover similarities and differences  Inference, reasoning and causal analysis to extract knowledge and provide explanations  No one company can possibly do all these things, but that is no longer a requirement. The current software development e
Read more